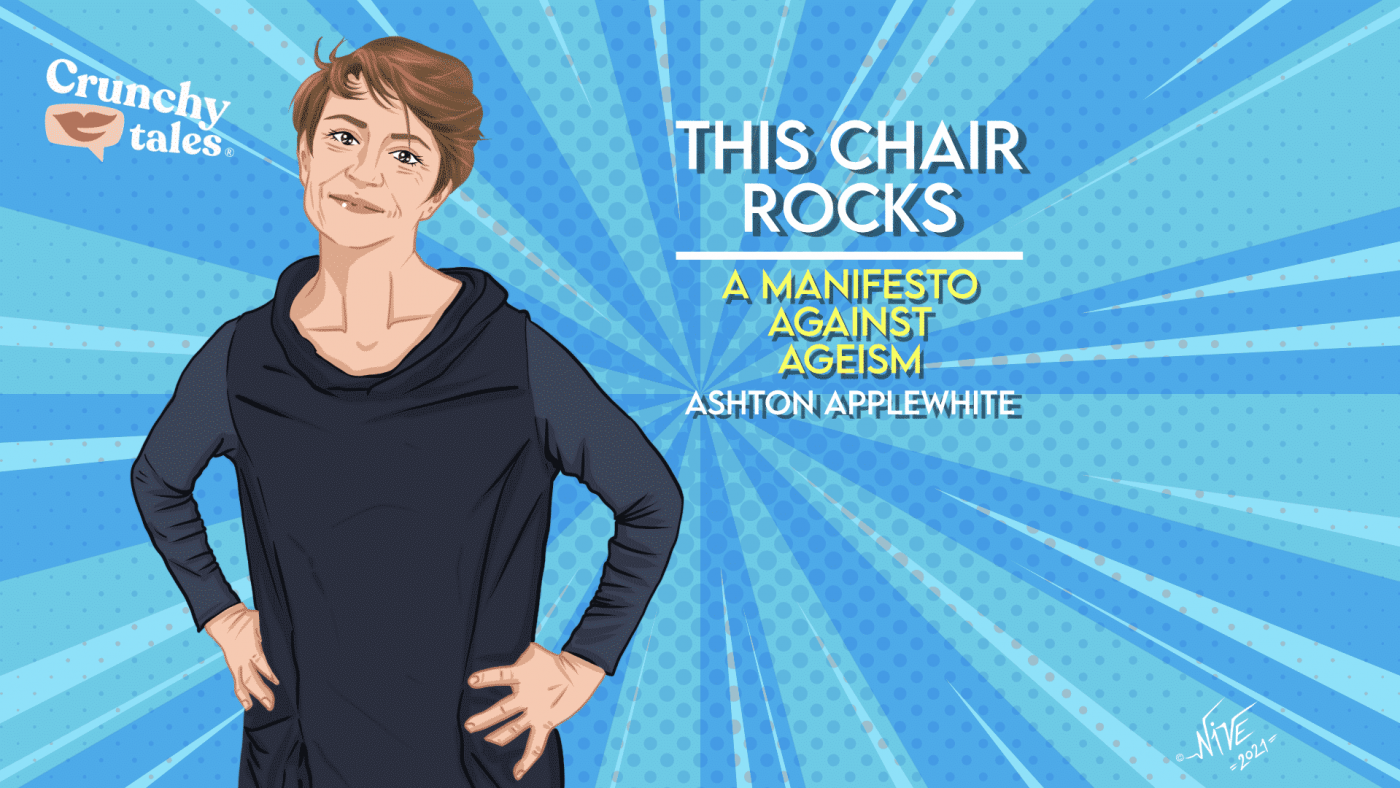 It’s time to push back against the fixed meanings attached to numbers (and wrinkles) in society. The activist and author of ‘This Chair Rocks: A Manifesto Against Ageism’, Ashton Applewhite explores with us the solution to ageism. “The only way to challenge age-based prejudices in ourselves and society – she says to CrunchyTales- is to look for reasons we are ageist rather than evidence that we’re not“.

Ashton, You’ve come to see ageing itself as a “natural, powerful, beautiful part of life.” It wasn’t always like that for you, though. What caused this mind shift?

I don’t have a very sexy answer, I’m afraid. I started looking into ageing and learning about longevity when was in my mid-50s – almost 15 years ago- because I was just very apprehensive about it. So, I started a project inspired by my in-laws of interviewing people in their 80’s and beyond who were working, learning and researching longevity and I learned in a matter of months, if not weeks, how many of my notions of what it was like to be old were wrong or not nuanced enough. Then I became obsessed with why so few people know these things. We live in a world where older people are less valued and I see it all around me. Ageism that is.

Your book helps us reframe the way we see ageing but it’s also a useful guide for challenging assumptions about growing older, for dispelling myths, fears, and prejudices about ageing. How can we push back against ageism in our daily life? It seems so difficult.

The attitudes you refer to are forms of internalised bias. We live in a culture that bombards us with negative messages about how awful it is to get old – especially for women – and unless we consciously stop to challenge them, they become part of our identity subconsciously. You know, we are all ageist and – just as frankly- we’re all racist. We have attitudes that are a function of where we grew up and the people we know. Age is no exception: we haven’t fought that much about age and it’s just beginning to be considered. The thing is we can’t challenge bias unless we’re aware of it. The good news is that once you see it in yourself you start to see it in the world around you. This structured way of thinking is very typical and warrants examination in the US, in particular, racism: I harbour racist thoughts and ideas but also it is entrenched in our laws, our institutions, our educational system and political system. The same is true of ageism, sexism, and any form of prejudice. Because all prejudices work to maintain the existing power structures, to keep powerful people in power. And once you start to see it in the world around you, it’s really liberating. You see, it’s like the women’s movement and consciousness-raising: we can group together and do something about it. Even the World Health Organisation has launched a global campaign this spring to combat ageism because they realised the biggest threat to increasing healthspan, to having healthy lives as well as longer life, is ageism and their goal is to change the way we think feel and act about ageing.

Have you ever encountered any examples of ageism in your life? If so, what did you do in those cases?

I think I’m a bit of a bad one because I’m self-employed but the world is full of these examples. Look at any of my social media feeds, all the discourses right now are around older women not being able to find work and massive discrimination in the workplace. Look at the dating scene, where men, to generalise and to put it in heteronormative terms, all want to date 17-year-olds. You know, there is this idea that a woman loses her value and her attractiveness the minute she ceases to be reproductively useful and it is everywhere. Ageism is often the first form of discrimination that white men encounter in the workforce when like all of a sudden they’re like: “Oh shit! I have all this skill and all this experience and I can’t get my foot in the door“. Well, welcome to the world in which women have always lived in and that is infinitely harder if you’re a woman of colour, you are an immigrant or you have a disability. And you know, young people can experience it in the workplace, too. I’m thinking of those guys in Silicon Valley starting having facelifts botox or hair transplants in their 30’s. You see, we are ageing from the minute we are born and ageism is any judgement on the basis of age and includes even those too young. Ageism is used to pitting younger workers against older workers so that employers can exploit both groups just like Italian factory workers coming to America and competing with Polish factory workers it’s the same. Capitalism has to exploit workers in order to grow.

What advice would you give to women who are afraid of losing their power and attractiveness as they age?

Well, it’s the same advice. You see, talking about attractiveness is inherently problematic already because by having this conversation we reinforce the idea that the most important thing about women is how we look. That is toxic. Think about your friends who are sexually active: they are not the thinnest, not the prettiest, not the youngest but they are the ones who have beaten back this narrative that you have to be young, thin and white to be attractive. I would say the most important thing women can do to change this narrative is to make friends of all ages and to learn to look more generously at themselves. We should stop judging each other by our looks. Anyway, there are so many voices telling women what we should look like, how we should behave and I don’t want to be one of them. If you enjoy dying your hair or you feel that you need botox to look beautiful in the world or to feel powerful, no judgement. It is hard and each of us needs to do these things in our own way, at our own speed. I’d also suggest starting a consciousness-raising group around how ageism and sexism can learn from each other. On my website called ‘Old School‘, we publish our own consciousness-raising guide and that might help; download it, read it, have a conversation.

SEE ALSO:  Claudia Crawley: "Everyone Will Benefit From Eradicating Racism From The World"

Our Society has made some progress in terms of diversity and inclusion – think about race or sex. On the other hand, ageing is still not included in the conversation? Why? What we can do to change this?

What we can do is to bring it into the conversation. I think that urbanisation has broken apart families and communities contributing to the isolation of the old and the young with people in the middle transferring to or living in cities. Massive divides that help ageism because they separate us. You see, we know so much already about diversity and inclusion around gender, race and sexual orientation but age is not placed in the same category. However, we can figure this shit out and the organic way to do that is thinking of something you like to do for a cause that is important to you and finding a mixed aged group to do it with. We can ask people what do they think of as criteria for diversity, what does a diverse group look like to them? And if they don’t include age we should ask: how about age?

Many women are reluctant to admit their age, especially when They are over 40. How can we break this way of thinking, this bad habit?

It is patriarchy, misogyny and capitalism that want us to be ashamed of our age, that want us to compete and spend money on products that cost millions. You know, the anti-ageing skincare industry is worth billions of dollars, but who said wrinkles are ugly? Wrinkles are actually fantastic. Yes, it is not easy when women have those moments looking in the mirror and thinking – what the hell happened- but I’d say, “think about all the things that DID happen”, instead. It is up to women to realise that as long as we are competing to stay young, we are competing against each other. One of the many benefits of ageing is that we stop caring so much about what people think of us.

I don’t like successful ageing because it describes ageing as something we either succeed or fail at. And we don’t succeed or fail at childhood. So, first of all, it’s a binary and binaries are always bad, I have learned. Secondly, to age successfully is a profoundly classist and capitalist model because it implies we can succeed in looking and moving like younger versions of ourselves. The face and body of successful ageing are invariably those ones from well-groomed, extremely physically active people, and the activities that enable us to be like that are all that expensive leisure: massages, excellent nutrition, which cost money. They are not available to much of the world. You know, we all want to be in control but that is a delusion and it links to this neoliberal idea that everyone is in charge of their own ageing and we have to do it alone and do it in the right way. And the fact is, no matter how rich you are, the decline is not inevitable but we cannot continue to look and move like younger versions of ourselves, we can’t.

If you could banish one stereotype about ageing, what would it be?

The stereotype I hate the most is this idea of old people being somehow being the same. It’s not true. This is not true of anything; it’s not true of newborn babies. But it is even more ignorant and wrong when it comes to ageing because the longer we live, the more different from one another we become. The geeky way that scientists say is that the defining characteristic of ageing is heterogeneity. But think about it: all the 17-year-olds in the world right now are way more alike developmentally, socially, physically, cognitively, than 47-year-olds, who are way more alike than 67-year-olds because we have had 27 more years of unique experiences. By the way, if we’re talking about being sexy which we don’t have to, there is a great quote by a scholar that I love named Margaret Gullette: “Cultures truly interested in pleasure don’t fetishize inexperience”.