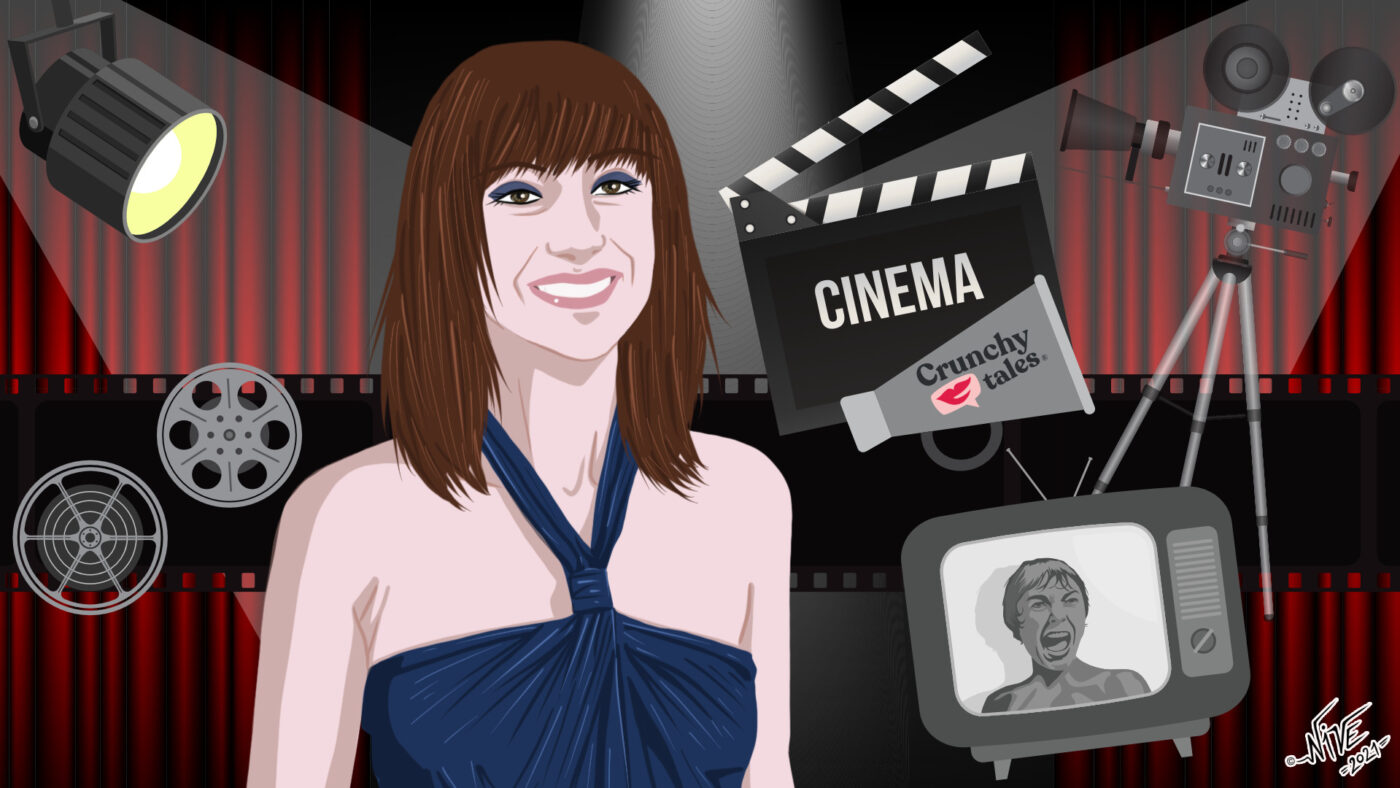 It’s by delving into her passion for Psychological Horror, Mystery and Sci-Fi genres that the 40-something-year-old Italian scriptwriter and film director Valentina Bertuzzi has found her midlife sparkle.

She has won several awards worldwide (including the Biennale College Cinema International at the Venice Film Festival) and her latest short film, Delitto Naturale (Nature’s Crime), has been critically acclaimed by both the national and foreign press with a nomination for the ‘Italian Golden Globes‘. However, it’s her never-ending sense of wonder that has made her a fantastic example of what CrunchyTales means by “successful ageing“.

Valentina, it seems that women really do love horror: why does this still surprise so many people?

That’s an interesting question. There are still many people who think that women are too ‘delicate’ for this genre: they often forget that fear is a very good friend to women. It’s our survival tool, the first step of self-defence, our alarm bell. Fear warns us that something potentially dangerous is coming. It helps us to avoid fatal mistakes. It pushes us to react, to scan a solution, and focus on a way out! So, of course, we’re interested in Horror.

You’ve won many awards, most of them in the middle of your journey as a woman and professional. Do you think that ageing has affected the narrative/storyline of your films?

I believe every new and significant experience in life can be an elaborate source of inspiration. Growing older has certainly affected my stories as I keep finding more fascinating characters, even plots, just looking around or into myself. Becoming a mother, in particular, has raised so many questions and inspired me films like ‘Stellanera’ – which was selected at Biennale College Cinema International, for the Venice Film Festival– and ‘Delitto Naturale’, both written with my sister, the novelist and screenwriter Francesca Bertuzzi.

What are the most challenging aspects of your profession? Do you think being a female director in such a particular niche make things more difficult?

You have to face different challenges in every film, but there is one, very special thing, which puts all film directors in the same boat: funding. It doesn’t matter if you need a few thousand or many millions. You can be Steven Spielberg or a young cinema student who’s never shot anything before but you’ll always need funding to make a film. Being a female film director also requires double the trust of male producers who mainly work with male film directors, male lead actors, and male-oriented stories. Fortunately, things are changing. Companies are evolving, and now is a good time to be a female film director, especially in horror which (just like the female ‘gender’) is becoming a more successful genre.

You’re not only a film director but also a film writer. Where do you find your inspiration? Who/What are your biggest influences; people, movements, styles?

I would love to know where to find the inspiration in order to run there whenever I need it! Ideas often flow out of my head like dreams, looking at things in a different way and from different angles. They can be an initial concept, or simply images and they usually tend to contain a strong metaphorical meaning. The hard work is deciphering them and determining what that image might be.

I think I’ve been influenced by the body-horror of David Cronenberg and David Lynch, which are my lighthouses and cinema masters. I’ve also felt the uncanny tone of Andrej Tarkowskij, or Ingmar Bergman much more disturbing and challenging than many ‘pure’ horror films. Some surreal visions of Federico Fellini are scary, too. They navigate into the subconscious and they are able to catch your hidden fears. Of course, I love the Italian master of horror Dario Argento, and I’m totally inspired by him. In my latest film, ‘Delitto Naturale’, the sound design by Claudio Bresciani (Suoni Lab), who created a ghostly pattern of whispers, echoes, and the wind blows, was also inspired by the Argento’s film ‘Suspiria’.

Exploring the dark side of people and being able to express them on screen has to be very difficult. In your opinion, do you think our phobias might evolve and change along the years?

Yes, and this is absolutely why we like (and continue to enjoy) horror. This genre is a concrete tool for a better understanding of our times, cultures, societies, and also ourselves. The same can be said for many other genres, but for Horror, in particular, this is the ultimate goal. Horror breaks the mould, criticises, desecrates, screams for freedom and truth, in even the most painful of them. Writing it, as well as directing it, performing in it, or simply watching it, has a cathartic effect. Indeed, watching a horror film is itself an act of breaking out of your comfort zone. You know, you won’t feel relaxed, you know you’ll feel bad, and yet you do it. It’s what I call the natural impulse to step into the unknown.

SEE ALSO:  The Courage To Be Disliked

In Horror stories the female characters are often blackmailed and persecuted by monsters, sadistic, killers, devils on every level but yet, they survive. That’s why we call them Scream Queens. And this is why women love Horror films because they shine a light on that side of us which will never accept being the ‘victim’.

What do you think midlife women are most scared of and why?

The fear of changing is probably one of our biggest phobias, as well as the fear of not being loved, accepted, or liked because of our body’s transformation as we age. However, I strongly believe that every woman has her own Scream Queen inside her that will fight until the end. Not being subdued by prejudices and not allowing someone else to crush her personality, spirit, charisma, appeal, a woman is able to beat her own fears.

Is there a particular mature/senior actress you’d like to direct in one of your horror movies? If so, what special appeal does she have that inspires you?

I’ve always appreciated the extraordinary talent of the Italian actress Laura Morante. I’ve found her velvet cat-like eyes so mysterious, dramatic and lively at the same time, just perfect for a sophisticated, intriguing, and very dark story. You know, there is something that never gets old in Cinema: the ‘sguardo’. As actors and actress get old, they don’t lose that look, their special glance. Through that, they can keep communicating a richer, darker, more fascinating dimension of themselves.

What advice would you give women that want to be involved within the horror film genre community or are interested in working within any area of that particular field?

Use your own fears as a weapon (a gun, a knife, a punch, a swearword) and make sure that it will get right to the heart of it.

Many horror movies tend to telegraph their ideas preparing you for the inevitable which can be sometimes quite obvious. Your films are different and I would say sophisticated: more psychological than blood, gore and CGI effects. You introduce the characters to us and build up their profile as the film continues ultimately leaving the viewer to decide for themselves what they feel and think. How do you see the future of this genre?

We are experiencing a new revival of horror films that are able to attract the attention of critics, audiences, and first-class festivals like Cannes, Venice, and even the Academy like never before. We have many great contemporary examples like Thelma by Joachim Trier, The Witch by Robert Eggers, Babadook by Jennifer Kent, It Follows by David Robert Mitchell, which stimulates horror through the uncanny feelings of their characters. They are classy, elegant, and sharp. It is thanks to those movies and others like them that the genre has recaptured the interest of an international audience worldwide. It’s the new Horror Renaissance!

In your opinion, why do we need to be watching more female-directed horror movies?

To unequivocally find out and share the many inner fears related to women, which have been ‘censored’ for millennia.

Last but not least, do you think watching Horror films can actually empower women in some way?

Yes indeed. From the moment that we can feel really free to represent, share and talk about our own fears, those fears will become weaker and weaker, and we will be stronger and cooler, passing our force and knowledge to the next generation of women.