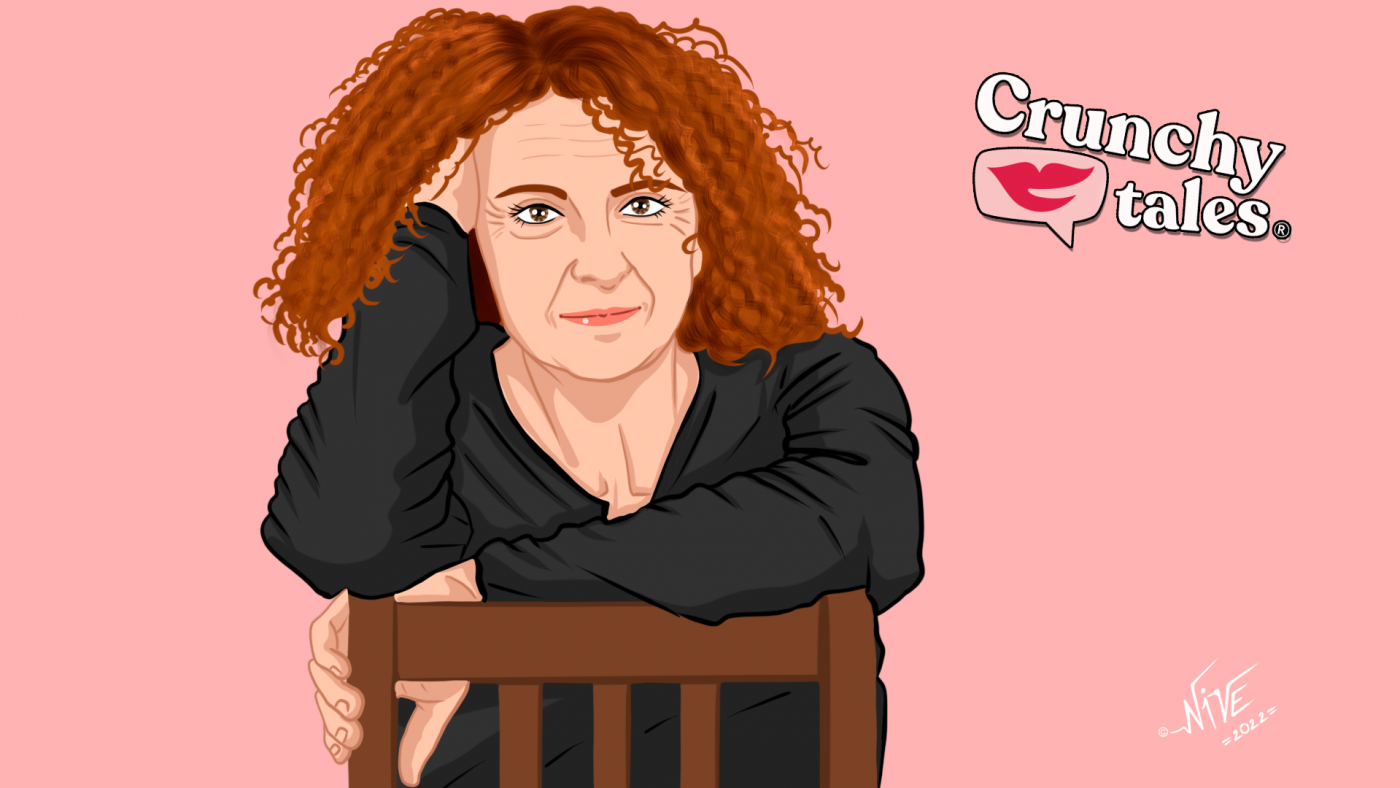 Having a strong personality and an inquisitive gaze, internationally acclaimed Italian actor Dora Romano, 66 years old, definitely knows how to pave her way into the world of show-biz as well as her own life, with courage, determination and perseverance.

Many of you would remember her as the wife of Dustin Hoffman in “Perfume: The Story of a Murderer” directed by Tom Tykwer. However, she has more than one string to her bow: she has also amazed audiences playing in various Shakespeare productions -such as “Macbeth”, “King Lear”, “The taming of the shrew” (BBC Television)– as well as studying with Jerzy Grotowski, Elizabeth Kemp, Dominic De Fazio, Ivana Chubbuck.

Her latest role in Paolo Sorrentino’s film “The Hand of God“, Signora Gentile is a harridan, with a hair-trigger temper, very much “direct and to the point” with some quite mean spirited remarks which makes us reflect on the ultimate meaning of loneliness and diversity for those women of a certain age who don’t quite fit into the status quo.

Dora, you are a very eclectic actress who’s had the chance to work with some great directors. Who do you think has influenced you the most?

Well, I’ve always learned something from all those ones I’ve had the pleasure to work with, whether directors or colleagues. But during my acting career, I’ve focused on refining my skills mostly looking at and studying various methods in order to develop a personal style. What really changed my way of acting was a meeting – 20 years ago- with the American ‘Actors’ Studio’ teachers, who showed me a way of working which I’d been searching for such a long time.

In your career, spanning more than 40 years, you have played so many characters. Which is your favourite one?

During my career, I’ve enjoyed playing many roles but the ones I loved the most are Mrs Gibbs in Wilder’s “Our Town”, Mother Superior in “Sister Act, the musical”, Maestra Oliviero in “My brilliant friend” and now Signora Gentile in the film “The Hand Of God“, the one directed by Paolo Sorrentino and nominated for the 2022 Oscars as best international film. Of course, I hope to enjoy many others in the years to come.

What does the evil “Signora Gentile” – the meanest woman in Naples- represent for you and how did you prepare yourself for this challenging role?


I’m sure that a bit of ‘Signora Gentile‘ is in all of us, but because of social conventions, education and our inhibitions, we aren’t all able to say what we really think. I searched inside myself the “bad component” and used a sensory approach: I fasted during the evening and breakfast before the set to make the act of devouring mozzarella credible and effective.

In your opinion, how would you define evil? And what do you think makes people carry out evil acts?

Evil surely has a strong and deep origin; very often it’s the result of loneliness, frustration and pain, something that we all have experienced in life. You know, there’s light and there’s dark. Both can’t exist without the other. That’s why I believe it’s important to have an awareness of that and learn to manage both sides.

It is said, “Evil is the exercise of power“. What’s your relationship with power?

I’ve never been really interested in power or in exercising power: good and evil for me have the same potential. It’s a matter of choice and I think that we should always take responsibility for the ones we make, and this goes beyond any religious beliefs.

Do you think as people get older and experience more things, they tend to become evil or bitter towards life?

Life is the sum of our experiences. It’s the way we deal with them that forges our journey. But, I say again, it’s always a matter of personal choice.

Women are often taught to be kind and compassionate. Don’t you think being a bit selfish would help sometimes?

I don’t think for one moment that women should be devoted to only selflessness and compassion: that’s a silly story they have told us for centuries. I think that women are able to be very selfish, when necessary, like anybody else.

Dora, women often struggle with their image, especially as they age. However, there are also many of us who are proud of the women we’ve become. How has your relationship with beauty evolved over the years?

I think that getting older should be an easier thing for a woman. Time goes by and nobody can stop it, fortunately. But, as an actress, sometimes I struggle with my body, especially when, for example, I think I’m overweight for a role, but I’ve never thought of having any type of surgery on my body or face. It sounds to me like having to please men or being accepted into showbiz. I don’t agree at all. My face, as an actress, has to represent what the character feels and with surgery, a lot of facial muscles simply die and nothing can be done to repair it.

What do you think about the term “successful ageing”?

You know, I’m 66 and I’m happy. I’ve built this happiness with sacrifice and passion, so, I believe all of us are beautiful if we are happy: simple!

Gender equality in Hollywood is a very topical conversation; how do you feel the industry is addressing it?

Unfortunately, gender equality is utopia at the moment, not only in Hollywood. Lots of young actresses have to compromise themselves. Something is changing but there’s a big wall to tear down. Until then, beauty and youth will be a big bargaining chip.

Many movie stars in Hollywood have spoken out about ageism. In your opinion, how can we reshape this ageist culture? Do you think this problem is affecting Italian actresses too?

Reshaping that idea means that we have to create roles and characters for all ages: entertainment has a big responsibility in creating the right ones. In Italy, it’s a huge problem and I’ve always suffered from it during my career.

What career path would you have taken had you not been an actress?

And finally, what are the most important lessons you’ve learned in your life?

I’ve learned to take something from anything and everything, through the exercise of humility and recognizing my own mistakes, without playing the victim of circumstances. In this particular moment, the world has to put away the desire for power and create peace.