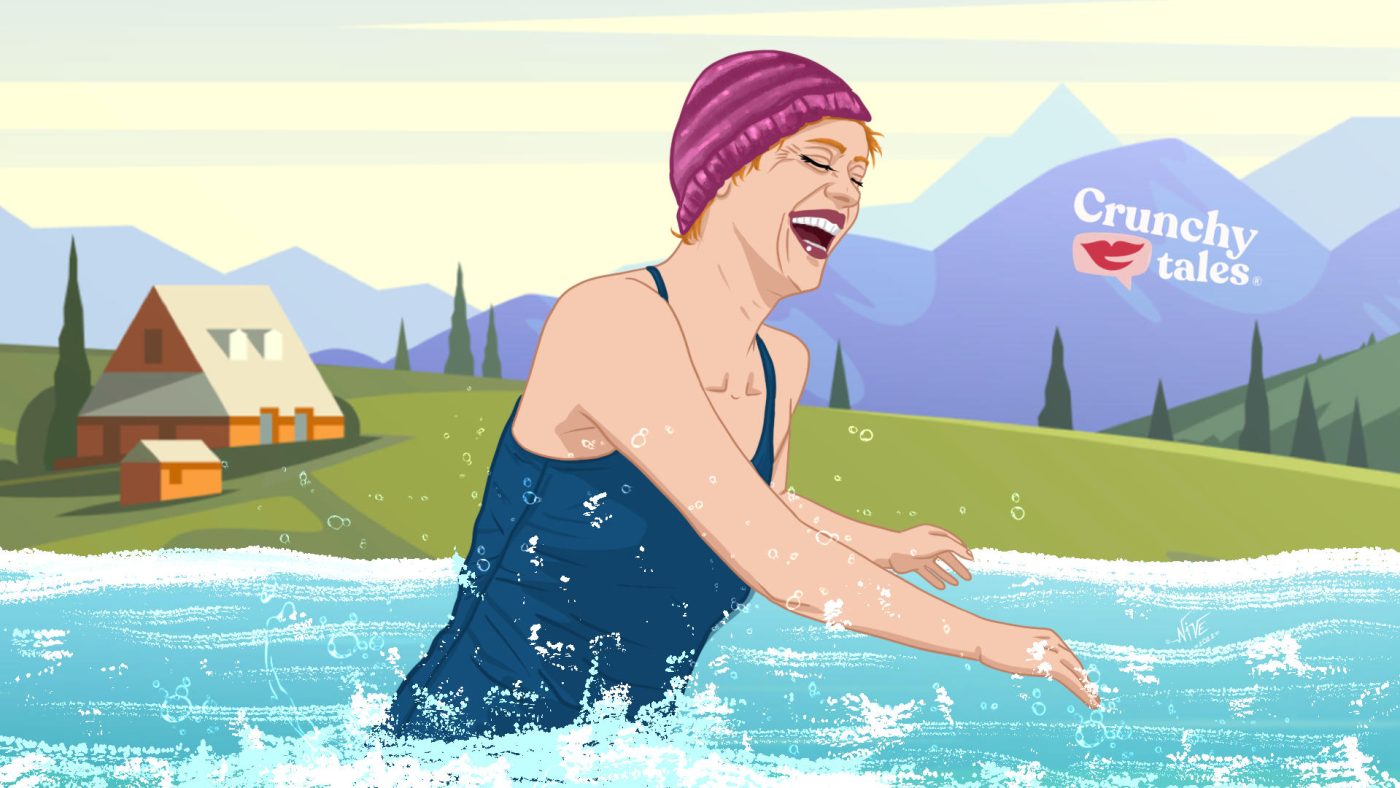 Have you ever jumped into ice-cold water? It may not sound appealing during the colder months, but those midlife women who regularly practice cold swimming would swear by the mood-boosting effects and sense of community. They find it exhilarating, refreshing or even restorative. Writer Cary J Hansson shares her cool experience with us and the way she got her mojo back.

This year I turned 55. Fyllade år (filled a year) as we say here in Sweden, where I live.

They keep coming, don’t they? Those birthdays. Time is unequivocal. Days pass, the world turns and we keep filling up the years, increasingly accompanied it’s true to say, by a sense of reduction, of things decreasing. Muscles atrophy. We wake in the mornings, stiffer and more cramped than a year before. Our memory can’t seem to hold as much or work as quickly. Shoulders round, we droop. And things that were entirely possible in our youth, now seem entirely impossible.

This is why I started my birthday the same way I start nearly every single day. With a dip in the frozen Baltic sea, something I’ve been doing for around four years now.

I’ve always dipped in cold water after the sauna; a long-standing tradition in Scandinavia. So I’ve always known the truth about that “feel-good factor” which is said to accompany it. Then a few years ago I saw a post on Facebook from a woman wanting to try cold-water swimming and looking for company. Answering that post was one of the best things I’ve ever done. We are instinctively herd animals and it’s much easier to strip down to your swimming costume, in December, if even just one other woman is doing the same. Once I started, I was instantly addicted.

Now I swim nearly every day. I say swim but as the water gets colder it becomes more of just a dip. Right now, with a water temperature of around ten degrees, I’m in for perhaps five minutes. That will decrease to just a minute, or a maximum of two, as the water drops to five or less.

It’s incredibly important to start slowly. Just a minute. Set a timer and always go with someone else and don’t be tempted to stay in longer. Remember, your body keeps dropping in temperature even when you’re out of the water. Take a thermos flask of something warm and a bite of something sweet. You will build up resistance and lower fear far quicker than you can imagine. Now I look back to the video of those first early swims and laugh at what cowards we were! Shrieking and screaming and barely able to last a few seconds. Now I break the ice and slip into the sea as rounded and silent as a seal. How far I’ve come in pushing out both physical and metaphysical barriers!

Which brings me to my earlier point about that sense of reduction.

Just the other day, I was talking to a friend about a shark dive I did in my thirties. The memory is still vivid, steel gauntlets on the Dive Master’s arms, the rush of water as sharks swooped from behind. And as I described all this, I was also thinking, Did I really do that? Was that really me? I think I could fly to the moon just as soon as dive with sharks now. Leaving the house after dark is an effort I don’t always make and this is the reduction, let’s call it shrinkage, I’m referring to. Every year it takes me longer to lower myself to the floor and attempt, for an excruciating minute, to sit crossed-legged. Choosing the same ingredients, making the same dinners, wearing the same comfy leggings just because. You get the idea.

So back to my 55th birthday. Never did I dream that I’d start the day stripping to a swimming costume, on a jetty covered with snow, in a country on the same latitude as Alaska! All of which is the opposite of shrinkage, and is in fact the reason I believe that cold water swimming, wild swimming, whatever you want to name it, has become so popular, so quickly amongst midlife women.

Because when we do it, we are pushing out the boundaries of our middle-aged lives, holding back the walls, we are – if only for a few minutes- reversing the process. It’s a fact that we leave the water enlarged and supercharged and as (temporarily) invincible as any untested young Adonis or Athena.

Do you want the science behind that fact? It’s the avalanche of endorphins released. That feel-good hormone all exercise produces. Only instead of pounding an hour on the treadmill, we can access the rush with a sixty-second dip in freezing water and still get to the supermarket in time to pick up something for dinner.

Life is busy, especially for those of us who are currently a part of the sandwich generation. We’re pushed and pulled in all directions by everyone else’s needs. But for five minutes a day, my time is mine alone. I’m brave, I’m healthy, I’m young and alive, and I always leave the water on a high.

There are of course other benefits. Cold water swimming boosts the immune system, improves circulation, burns calories, reduces stress and is said to increase libido.

I didn’t know any of this when I started and it’s certainly not what drives me down to the water every morning. The only thing I understood was that surge of joy, a feeling that only becomes more difficult to access as we age.

Not everyone is as lucky as me, living so close to the sea. But everyone does have a shower at home. Start there. Turn it too cold for the last minute. Begin slowly, build up and I guarantee that within a week you’ll be addicted; you’ll be stepping out of the bathroom with a sense of energy you may not have experienced for years.

After that, the world is your oyster. Find a group, join in and get swimming.

Cary is a 50something mum of three, an ex-dancer, actress, waitress, cleaner, TV presenter, double-glazing sales rep, fax machine operator. You name it and she’s cleaned it, served it, sent it or sold it. After years of globe-trotting and messing about, she settled down to a BA in Literature and Creative Writing, got a First Class and promptly moved to Sweden to start her own midlife adventure. She swims in the Baltic sea year round, paddle-boards under midnight suns and has learned to sail. The author of six books and several short stories, and author of A Midlife Holiday: Part 1 of The Midlife Trilogy, Cary‘s work has been shortlisted in national and international competitions. She writes stories about ordinary people, living lives of extraordinary courage and indestructible humour. She promises only two things: no knights in shining armour and no flying cars. Her characters save themselves, as in the end, we all must do.