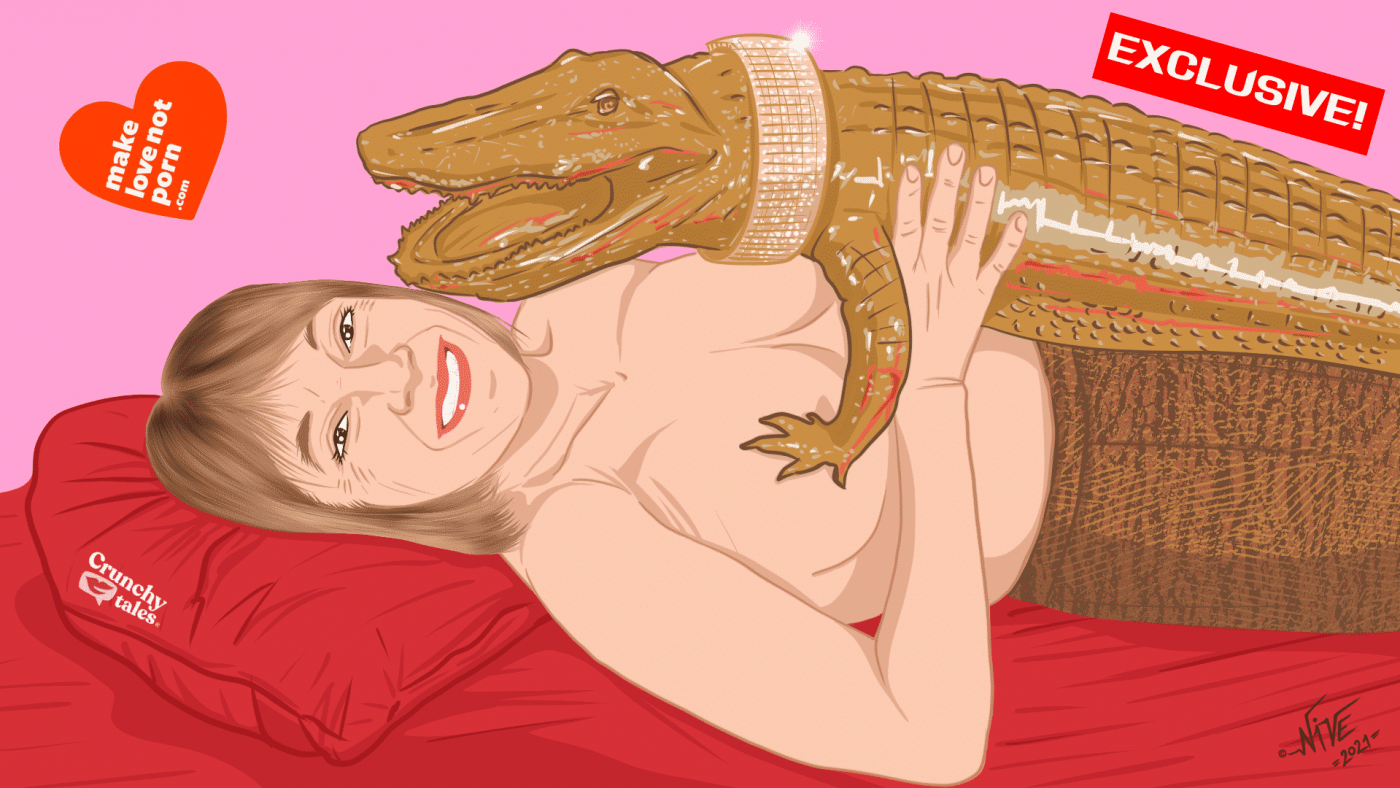 If there is one woman in the world who is fearlessly debunking myths and breaking taboos about ageing and sex, that’s Cindy Gallop. Former chair of the US office of advertising agency Bartle Bogle Hegarty, she then founded IfWeRanTheWorld and the social sex video sharing platform MakeLoveNotPorn. Gallop’s Talk “Make Love Not Porn” is still one of the “most talked about TED presentations”. Creative, glamorous and ‘crunchy’, she is a pioneer of sex tech and describes herself as the Michael Bay of business. There are no grey areas in Cindy: what you see is what you get and we like it a lot.

Cindy, one of your favourite quotes is: “In order to predict the future, you have to invent it”. How can midlife women break free from social pressures and follow their own path when everyone expects them to give up as they age?

First of all, I want to say to all midlife women out there: you are never too old to do anything. I’m 61 and I tell everyone how old I am as often as possible. You will hear very often people saying: “Oh, age is just a number”. I disagree. Your age is a very special number because it’s the sum total of all your lived experience to date. Everything you’ve learned, everything you’ve become. The older you are, the more you have to offer and the more you have to work with. That’s why I created the hashtag #SayYourAge; I want all of us to say our age loud and proud. I would say to all midlife women: you are only halfway. You have as long to live again as you’ve lived to this point and it is never too late to do anything, especially because now is the perfect time to reinvent your life. The pandemic has ensured globally that the world will never be the same again and that is actually despite this being a very tragic event, that is very good news especially for those of us who were never the status quo to begin with. Because it is only when everything breaks down, as utterly and completely as it has done with the pandemic that is what then allows new models and new ways of doing things to emerge that never would have been allowed to emerge otherwise. So now is the time for all midlife women to completely reinvent their lives.

Women in their 50’s have so much experience and knowledge attained over the years, yet if we decide to take up an unconventional sport or hobby or even a new venture it tends to be ridiculed, whereas if a man did this he would be revered. This type of thinking has to stop, how can we do it?

I want women to understand how ridiculously topsy turvy the world is. We are surrounded by sexism in our daily lives to the extent that we don’t see it and understand how ridiculous it is. Stop telling women to be more like men, tell men to be more like us. I don’t think women should start saying sorry less, I think men should start saying sorry a whole lot more.

You inspire women to embrace an alternative future where they are not only equal but are powerful too. When you hit 40 and started entering midlife did you feel more empowered? If so, why? Was there any particular event that made you change?

Everything in my life has happened by accident and my turning point came actually at the age of 45. On February 1 2005, my 45th birthday, I thought: “Oh my God, I’ve just worked 16 years for the same advertising agency (Boden and Hergady – BDH). I’d worked for them in London, Singapore and New York. It’s time to do something different”. And the issue was I hadn’t the faintest idea what. Midlife is a time when you should pause, take stock and reflect, so I reviewed every possible option open to me for what was effectively the second half of my life. I put myself on the market very publicly, taking a massive leap into the unknown. I resigned as chairman of BDH New York without a job to go to. I’ll tell you, that was the best thing I ever did with my life. I am now evangelical about working for yourself and I say that because many women make the mistake of thinking a job is a safe option. It’s not. Because in a job you are at the complete mercy of management changes, industry downturns, marketplace dynamics. I always say to people: “whose hands would you rather place your future in? Those of a large corporate entity who at the end of the day doesn’t give a shit about you or somebody who always have your best interests at heart, for example, you?”

For many of us, midlifers, it’s not always easy to leap into the unknown. What would you suggest to us in case we want to launch our own venture?

You can start your own business while you are working in your own job. You don’t have to give up that income and in the meantime, you can test the market and you can build a community around it. Once you’ll start making money, the transition will be easier. You can do what I do with my startup MakeLoveNotPorn; I continue to work as a consultant to support myself alongside it. You know, there are many ways in which you can fund your own business and I encourage women to do this because this is the quickest path to top wealth generation. In whatever industry you work in, I advise you to take a long hard look around you and identify what is missing. Identify what you would be able to use that nobody else has thought of and then start that. When you start it, you only have to make it work for a few years, and then a giant company will buy it from you for a shit tonne of money. Get acquired that’s your quickest path to making an absolute goddam fucking shit tonne of money.

SEE ALSO:  What Would Joan Collins Do?

Since 2009, you’ve been embracing the sex tech world. How did you come up with MakeLoveNotPorn?

How could midlife women benefit from MLNP?

Social sex videos on MLNP are enormously reassuring because we celebrate the real world and real-world bodies and that’s important because you can talk body positivity all you like, you can preach self-love at the end of the day, but nothing makes us feel great about our own bodies like seeing people who are a no-ones idea of aspirational body types getting turned on by each other. In our culture, especially older women are surrounded by messages like you are not sexually desirable unless you are young and skinny look like. At MLNP you see what people find really sexually desirable in the real world. We celebrate the fact that middle-aged and older women with our breasts, our bodies, our curves are hot as fucking hell. And again, do you know what makes you hot and desirable? It’s you, the way you are.

You gave a talk at TEDUniversity in LongBeach several years ago called “The Toyboy Manifesto: Why Older Woman +Younger Man Is the Relationship Model of the Future”. Many midlife women would like to be as daring as you but sometimes they feel a bit unconfident. Do you have any advice on this?

I recommend every woman to date younger men: it will be a revelation. Out there in the world, there are so many of them who want to date older women but because of that societal pressure, they are often embarrassed to act on that or to have it known. I have never been told I’m beautiful as often as since I’ve started dating younger men.

Middle-aged women tend to be represented very differently to men of the same age in the media. The way they are generally portrayed in films, adverts, or TV shows still follows the general clichés. How can we reshape this ageist culture?

I’ve campaigned for years to end ageism in advertising, my own industry. To end stereotypes of older people in the media, the industry itself should hire, promote and champion mature professionals writing the ads and shooting films. But in the meantime, every single older woman can play their part to change this by role modelling themselves how they want to be represented. That’s what I do. I consider myself a proudly visible member of the most invisible segment of our society which is older women and by the way, I live my life. I want to completely change what society thinks an older woman should look like, talk like, dress like, work like, be like, date-like, and fuck like. I encourage every older woman out there to do the same thing. Live your life out loud and proud the way you want to and you are role modelling older women for everybody else.

How would you define successful ageing?

Successful ageing is very simply that you are happy in living your life the way you are. It’s just being happy with yourself, that’s all.

You are considered the most provocative woman in the world. What does it mean to be provocative for you? Also, is there anything that provokes you?

I find it very entertaining when I am described as provocative outspoken, those are not words I ever use to describe myself. Because all I’m ever doing is being me. All I’m ever saying is what I think and the fact that other people find that is provocative and outspoken, it’s just a reflection on society, not a reflection on me. Ask yourself, why when somebody is simply honest straightforward and truthful do other people think that is provocative?